Prof. Farhadi’s Breast Surgery pads have replaced the forced air warming system in all patients after a microsurgical breast reconstruction. The patients have described the pads as soft, comfortable and non-scratching.

It gives them safety and security after a traumatic procedure of loosing their breasts.

“I use the pads in the following situations and reason:

*After microsurgical breast reconstruction: to keep the flap warm

*After mastectomy and implant based reconstruction: to avoid too much pressure on the skin flaps 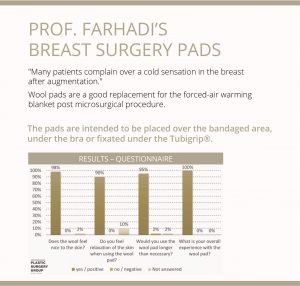 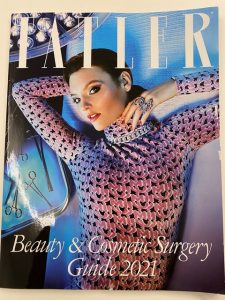 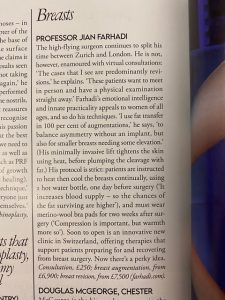 Consultant Plastic Surgeon and past Director Department of Plastic & Reconstructive Surgery at Guy’s and St. Thomas’ Hospital in London, founder and lead plastic surgeon at Plastic Surgery Group in London and Zurich.

Prof. Farhadi’s career is characterized by numerous international stations. He is a fifth generation surgeon. He completed his medical studies at the University of Basel and at the Pitié Salpetrière in Paris. This was followed by several years of surgical training at the Regional Hospital Burgdorf and at the Inselspital Bern. Prof. Farhadi entered a research fellowship at Yale University in the USA after obtaining a National Scholarship. He completed his training as a specialist in plastic, reconstructive and aesthetic surgery at the University Hospital Basel in 2005. During the period of specialist training, he completed another research year in the field of tissue engineering in the Department of Biomedicine. He earned his habilitation in 2007. In 2016, he was awarded the title of professor at the University of Basel.

To pursue his interest in breast surgery, he began a fellowship at Guy’s and St. Thomas’ Hospital in London. Following this, Prof. Farhadi was appointed as a Consultant. In 2012 he was elected Department Head. During his tenure, he built the Plastic and Reconstructive Surgery Department into one of the largest in Europe. This included 24 consultant and 34 junior doctors and fellows. During this time, Prof. Farhadi trained numerous specialists in the field of aesthetic and reconstructive breast surgery.

“For years surgeons have tried to find methods to improve the blood flow in the skin of the breast and the complex areola and nipple, and thus reduce the risk of complications after a mastectomy.
Different systems for providing heat, such as electric blankets, hot water… all are uncomfortable for the patient and can sometimes pose negative effects, such as skin burns. We found the solution in the use of a pad in merino wool from LANACare, which is placed on the breast the day before surgery. It acts as a thermal blanket, very pleasant and soft to the touch. It increases the temperature in the covered area. And because it is pure wool, which absorbs moisture without feeling wet, the skin may perspire, which is the most important condition for increasing blood circulation.”

In Norway there are an increased number of women with BRCA mutation, these women have an increased risk of developing breast cancer during their lifetime. The treatment is usually prophylactic mastectomy.
I perform many of these types of surgeries in team with a breast surgeon. In these procedures the breast surgeon performs a so called skin sparing mastectomy and I as a plastic surgeon then reconstruct the breast usually using implants together with skin- muscle flaps or with the use of cellular dermal plates. The main problem is that the skin coverage over the implant can be very thin and thus have compromised circulation and decreased thermal abilities.

The patients tolerate the pads very good and many continue to use the pads even after many weeks because they find them comfortable and they feel less coldness on the reconstructed breast.”

Dr. Georg Panczel is a specialist in plastic and hand surgery at Aleris Coloseum Clinic in Stavanger, Norway.

His special field is cosmetic and reconstructive surgery in which field he has more than 10 years of experience.

Dr. Panczel has a special competence in reconstructive surgery in connection with breast cancer.